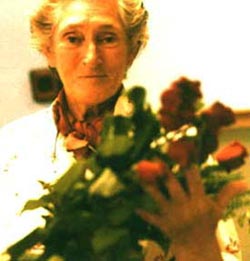 The knitting world lost a great inspiration and "unventer" when Elizabeth Zimmermann passed away peacefully on the last day of November, 1999. She is survived by her husband, Arnold, a son, Thomas, 2 daughters, Lloie and Meg, 2 grandchildren, Liesl and Cully, 1 great-granddaughter, Cecelia, and an extended "family" of innumberable knitters, to whom she gave confidence, inspiration, humor, encouragement, and control over our knitting.

I first encountered Elizabeth Zimmermann when her first series, "The Busy Knitter" ran on public TV in St. Louis and bought a copy of Knitting Without Tears from Book of the Month Club in the early 70's. A few years later, I actually got to meet her and to attend Knitting Camp, where I also met some knitters who have become very close friends over the years. I don't think it's an understatement to say she changed my lifeshe certainly changed my knitting! Before EZ, I probably wouldn't have strayed far from a written pattern. Now, I rarely use patterns, but instead, create them, which wouldn't have happened without Elizabeth's inspiration and encouragement.

Elizabeth is gone, and yet her spirit, her ideas, and her inspiration are still with us in her designs, her books and not least, in her daughter, Meg Swansen.

Knit on in peace, Elizabeth, and thank you so much for everything!